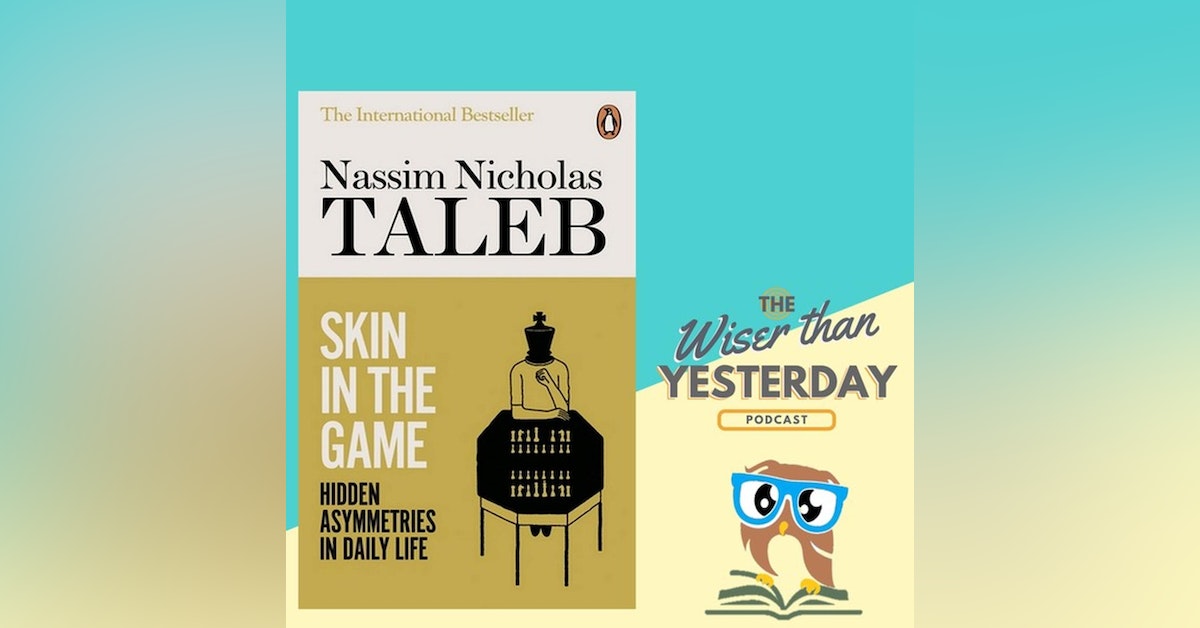 Hidden Asymmetries in Daily Life. Having a measurable risk when taking a major decision -- is necessary for fairness, commercial efficiency, and risk management, as well as being necessary to understand the world.

Season 2
Skin in the Game: Hidden Asymmetries in Daily Life, is a 2018 nonfiction book by Nassim Nicholas Taleb, a former options trader with a background in the mathematics of probability and statistics. Taleb's thesis is that skin in the game -- i.e., having a measurable risk when taking a major decision -- is necessary for fairness, commercial efficiency, and risk management, as well as being necessary to understand the world. The book is the last part of Taleb's multi-volume philosophical essay on uncertainty, titled the Incerto. Summary Another classic book from Taleb. He makes a sound argument for alignment of inscentives and why many problems in the world come from people not having skin in the game. Key Idea If an actor pockets some rewards from a policy they enact or support without accepting any of the risks, economists consider it to be a problem of "missing incentives". In contrast, to Taleb, the problem is more fundamentally one of asymmetry: one actor gets the rewards, the other is stuck with the risks.[1] Taleb argues that "For social justice, focus on symmetry and risk sharing. You cannot make profits and transfer the risks to others, as bankers and large corporations do... Forcing skin in the game corrects this asymmetry better than thousands of laws and regulations." The centrality of negative incentives Actors - per Taleb - must bear a cost when they fail the public. A fund manager that gets a percentage on wins, but no penalty for losing is incentivized to gamble with his clients funds. Bearing no downside for one's actions means that one has no "Skin In The Game", which is the source of many evils. An evolutionary process is an additional argument for SITG. Those who err and have SITG will not survive, hence evolutionary processes will eliminate (physically or figuratively by going bankrupt etc) those tending to do stupid things. Without SITG, this process cannot work. Examples Robert Rubin, a highly-paid director and senior advisor at Citigroup, paid no financial penalty when Citigroup had to be rescued by U.S. taxpayers due to overreach. Taleb calls this sort of a trade, with upside gain but no or limited downside risk, a "Bob Rubin trade." Intellectual Yet Idiot Intellectual Yet Idiot (IYI) is a term coined by Nassim Nicholas Taleb in his essay by the same name that refers to the semi-intelligent well-pedigreed "who are telling us 1) what to do, 2) what to eat, 3) how to speak, 4) how to think… and 5) who to vote for". They represent a very small minority of people but have an overwhelming impact on the vast majority because they affect government policy. IYI are often policy makers, academics, journalists, and media pundits. Some favourite quotes The knowledge we get by tinkering, via trial and error, experience, and the workings of time, in other words, contact with the earth, is vastly superior to that obtained through reasoning, something self-serving institutions have been very busy hiding from us. Bureaucracy is a construction by which a person is conveniently separated from the consequences of his or her actions. Avoid taking advice from someone who gives advice for a living, unless there is a penalty for their advice. Seeing the psychologist Steven Pinker making pronouncements about things intellectual has a similar effect to encountering a drive-in Burger King while hiking in the middle of a national park. Evidence of submission is displayed by the employee’s going through years depriving himself of his personal freedom for nine hours every day, his ritualistic and punctual arrival at an office, his denying himself his own schedule, and his not having beaten up anyone on the way back home after a bad day. He is an obedient, housebroken dog. What we saw worldwide from 2014 to 2018, from India to the U.K. to the U.S., was a rebellion against the inner circle of no-skin-in-the-game policymaking “clerks” and journalists-insiders, that class of paternalistic semi-intellectual experts with some Ivy League, Oxford-Cambridge or similar label-driven education who are telling the rest of us 1) what to do, 2) what to eat, 3) how to speak, 4) how to think, and… 5) whom to vote for. People who are bred, selected, and compensated to find complicated solutions do not have an incentive to implement simplified ones. If your private life conflicts with your intellectual opinion, it cancels your intellectual ideas, not your private life. Survival comes first, truth, understanding, and science later.